PBLA as a classroom-based assessment system was developed using foundational principles from assessment theorists and the Canadian Language Benchmarks.

The development of PBLA was undertaken as a priority of Immigration, Refugees and Citizenship Canada (IRCC)1 in response to recommendations in several pivotal studies on language.

Makosky (2008) and Nagy and Stewart (2009) noted that assessment in LINC (Language Instruction for Newcomers to Canada) programs was ad hoc and inconsistent. This raised concerns about the reliability of the Canadian Language Benchmarks (CLB) outcomes of language training reported to the federal government. The reports recommended that the federal government implement a teacher-based assessment protocol in federally-funded language training programs.

In 2009, an intergovernmental study of settlement language training across Canada advised IRCC to adopt a national language portfolio assessment system to capture language development progress (Federal, Provincial, Territorial Forum, 2009). As a teacher-led, classroom-based approach, portfolio assessment was seen as facilitating authentic assessment and offering an alternative to standardized testing. It would provide teachers and learners with a tool to document, review, analyze, and reflect on learning.

To ground the initiative in best practice, IRCC looked to other uses of portfolio assessment to document language learning. In Europe, the Common European Framework of Reference for Languages (CEFR) was using the European Language Portfolio (ELP). First piloted from 1998 to 2000 and introduced on a pan-European scale by the Council of Europe in 2001, the ELP is a self-assessment tool used to evaluate, describe, and document learners’ language learning and proficiency; to set personal language-learning goals; and to plan further learning.

In Canada, Manitoba had been using portfolio assessment in adult ESL and ESL Literacy programs for a number of years. Collaborative Language Portfolio Assessment (CLPA) was introduced by the provincial government in 2004 and standardized across government-funded programs in 2009 (Pettis, 2009). The experience gained through the CLPA project informed the federal government’s national portfolio initiative.

1 Known as Citizenship and Immigration Canada (CIC) at the time.

We suggest reading the new
PBLA 101 For Administrators
document if you have not already done so. 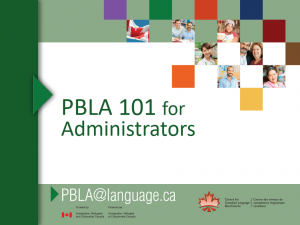 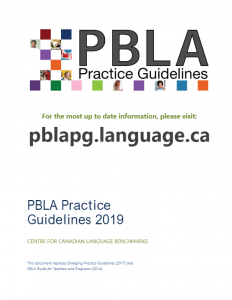 We suggest viewing the
Introduction to the PBLA Practice Guidelines 2019
presentation if you have not already done so. 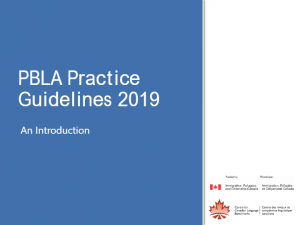